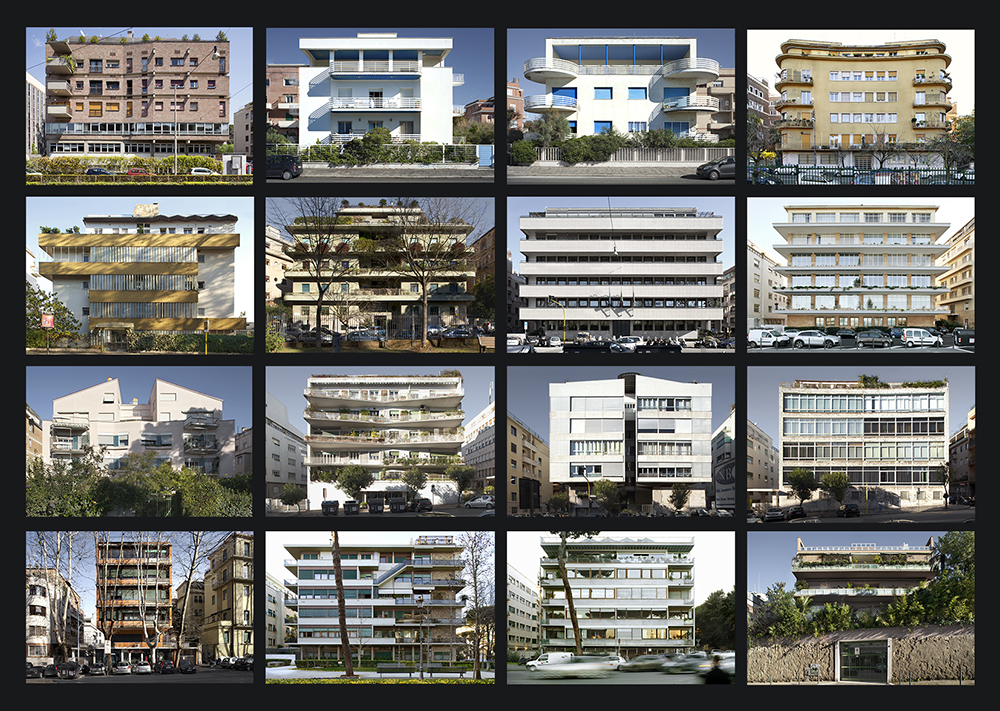 Camilla Borghese’s photos of architecture have more than one meaning and, at the same time, lead to a sequel of considerations.

The latter vary according to the onlooker and to whoever decides to “use” them.

As for a work of architecture that, after having being accomplished, does not belong (or at least should not belong) to whoever planned it or commissioned it, but only and exclusively to those who use it and dwell in it.

The first of the different meanings of these images resides in the author’s capacity to recover, through the photographic shot, that degree of abstraction normally proper of the design of the façade: that modality of representation through which the architect controls the relation among the different parts, the system of filled spaces and voids, the eurhythmics of the design of the involucres, natural filter between the cities’ outdoor space – public space to be exact – and the space of private houses.

For the way these photos are composed they speak of and at the same time establish an efficacious study tool.

For an architect the reading and interpretation of reality merge theory and plan together.

A very refined technique allows to stop the instant of an organism’s life that returns the act in which the planner shows, through the design of the façade, his own special dimension and offers a permanent image of his personal thoughts, the part he hands over to the life of the city to which it will henceforth belong.

The subjects of the photographs are chosen with the aim of restoring dignity to that widespread quality system that the small roman buildings (palazzina) have represented in the course of time, configuring under the typological profile, the moment when the commissioner’s sensitivity, the architect’s skill and the ability of the building contractor find an extraordinary point of contact and identity of views as will never again occur in the private building sector.

These photos tell us all this and much more.

They are the result of an only apparently discreet eye, absolutely attentive and patient in choosing the frontal picture and forsaking every form of image distortion, thus reducing the number of subjects to be represented.

The image fully restores the sense of the architecture of those years, the discovery of the tri-dimensional value of the façade, inhabitable space, as deep as one wills, no longer obstinate and bi-dimensional as the nineteenth century wall.

Each photo weighs heavily on us because it clearly lets us understand the time spent waiting for the right light to which, in the shot, the entire city obeys by giving back a deeply current image, absolutely unwilling to hide the architecture from the invasive presence of cars and all those signs, sometimes catatonic, that design today’s urban landscape.

Neither do the photos intend to conceal the faults of man’s evil hand that has irreparably jeopardized much of that architecture, as the Furmanik building by Mario de Renzi on the Lungotevere Flaminio.

The buildings stand out in full solitude. The “solitude of buildings” as Rafael Moneo calls it.

Time stops and the city is suspended and bends to the horizontal and the vertical dimensions, dimensions proper of man through which he, as an architect, has always measured and designed space.

in the exact moment of suspension Camilla Borghese’s photos do not only give us back the architectonic object, but also the entire reference context that suggests the silent atmosphere of Adalberto Libera’s detached cottages in ostia or the chaos of Viale del Circo Massimo before which Amedeo Luccichenti and Vittorio Monaco’s buildings open up to the onlooker.

And at the same time, in the fraction of a second, the inhabitants too offer us and the photographer what they want us to know about them, about their way of using the space, almost accomplices, though unaware, of the photographer’s will.

While the building shows us its façade it is easy for us to make the photographer’s viewpoint our own, almost as if to remind us that the act of an artist, whether an architect, a painter, a sculptor or a photographer, is firstand foremost a service, devoid of all personal aims; as if Camilla Borghese wished to tell us what Maurizio Ferraris writes in the “manifesto del nuovo realismo”, “….. we cannot do without reality, without it standing right in front of us and not being willing to negotiate”.